Here, we will look at iconic cars used by James Bond in the film series. Of course, the only place to start is the most iconic Bond car of all. However, we also will look at a bunch of other cars that are fondly remembered by fans of the series.


The Aston Martin appears in one form or another in the Eon Productions films "Goldfinger," "Thunderball," "On Her Majesty's Secret Service," "The Living Daylights," "GoldenEye," "Tomorrow Never Dies," "Die Another Day," "Quantum of Solace,"  "Casino Royale" and "Skyfall." According to surveys, this is the most popular Bond car. The actual one that Sean Connery drove in "Goldfinger" recently sold at auction for £2.6m.


Sean Connery began the obsession with James Bond's ride with his 1964 Aston Martin DB5 in "Goldfinger." This is the one with the ejection seat, rear-mounted bulletproof shield, machine guns, revolving license plate, and cup holders. Actually, I'm joking about the cup holders, those weren't invented for another ten years.

Above, Daniel Craig with his Aston Martin DB5 in "Skyfall." The original Aston Martin obviously was outdated by the 2000s, but it provided a link to the earliest years of the James Bond series. It was seen in Daniel Craig's "Casino Royale," "Skyfall" and "Spectre." The Aston Martin DB5 also is seen briefly in Pierce Brosnan's "Goldeneye," "Tomorrow Never Dies" and "The World Is Not Enough."


The Aston Martin DBS, a successor to the iconic DB5, was featured in "On Her Majesty's Secret Service." It appeared in the opening sequence and later during the chase through the winter rally. It also is the car in which Bond and his new wife leave for their honeymoon (and we all know what happened then).

The Aston Martin V8 Vantage appeared driven by Timothy Dalton in "The Living Daylights." This is a direct descendant (and the last) of the one George Lazenby drove in "On Her Majesty's Secret Service." It was loaded with gadgets, such as spiked tires, retractable skis, steel-cutting lasers, and missiles.

Aston Martin DBS V12 was in "Casino Royale" and "Quantum of Solace" (a black 2008 model). It was the latest Aston Martin at the time, and didn't have many gadgets. The real selling point was the luxurious interior and a defibrillator (which comes in handy in James Bond's line of work). At that time, Ford Motor Company owned Aston Martin, so technically this was another American car.

Continuing the tradition of using Aston Martins, the Aston Martin V12 Vanquish went to work under the driving skills of Pierce Brosnan in "Die Another Day." This was the famous "invisible car" that later had a chase across an ice field.

This was the model car that many kids built in the 1960s and 1970s (and some perhaps still do). It is the classic version, with the guns in the front and the metal plate that comes up behind the rear window. Some versions of the original Aston Martin James Bond car were sold with cords and controllers attached, with which kids could "drive" them. 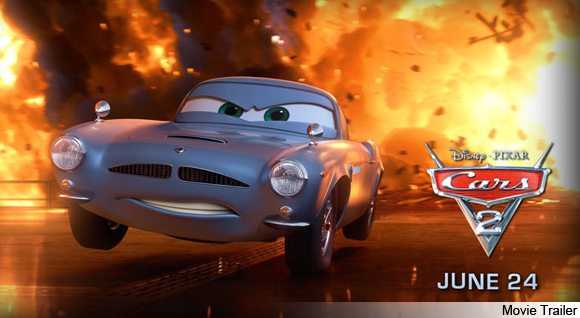 
In "The World is Not Enough" (1999), Pierce Brosnan drives a BMW Z8 (E52). It also features in the video games: James Bond 007: Agent Under Fire and 007 Racing. In the film, it was driven by Bond (Pierce Brosnan) until being sliced in half by a helicopter equipped with tree-cutting saws in Azerbaijan. The car was also featuring in the music video for the theme song, driven by Garbage lead singer Shirley Manson (who could not legally drive at the time).

Pierce drove a BMW Z3 Roadster in "Goldeneye" (1995). It is perhaps the sleekest car of the bunch, but the producers of the series felt it important to go back to the series' roots once Daniel Craig took over. So, they returned to the original Aston Martin, at least in promotional shots.


Not every James Bond car was a high-priced, fancy sports car. The 1962 Sunbeam Alpine Roadster was a light lake blue convertible that James Bond rented in Jamaica to drive to the mountain apartment of Miss Taro. He is chased by The Three Blind Mice in a hearse on the way up, but drives under a crane in the road which the hearse can't fit under.

Here is a slightly better view. It really is a pretty car, though very ordinary. It was used in the film because the producers couldn't find any other sports car that would work! Someone just happened to have one, so they used it rather than hold up production looking for something fancier. So, if you are of the opinion that "nobody ever drives those James Bond cars in the real world," at least in this one instance you are completely wrong.

Roger Moore drove a Lotus Esprit Turbo in "For Your Eyes Only" to a ski resort in Northern Italy. It looks great with a pair of skis on top. In fact, it was suited to all sorts of exotic uses.

The Lotus also is the car that Bond drove as a submarine in "The Spy Who Loved Me." The dashboard transforms into a submarine instrument panel, and Barbara Bach was along for the ride. No, the car couldn't really do what it did, but it sure looked like it!

'The Citroen 2CV is another "ordinary" car used by James Bond. It featured in "For Your Eyes Only," this was somewhat of a joke vehicle for Roger Moore to drive as Bond, as it ultimately which winds up in a swimming pool. It wound around the hills of a Spanish olive grove plantation. It had to be fit with a more powerful engine than was standard for it in order to stand the strain. The car was so popular that Citroen made a special 007 edition, and the Corgi model car was one of that line's best sellers.

In "You Only Live Twice," James Bond had to drive a Japanese car, and this is the one. It was driven by Bond girl Aki, who helps James Bond escape from some trouble. This was a special model, as no convertibles were sold in this form. Sean Connery was so big that he barely fit in it. Only 300 GTs total were made.


Bond didn't only drive European cars. In "Diamonds are Forever," set partly in Las Vegas, Sean Connery as James Bond drives one while evading the police. Its most famous sequence is when Bond has to go up on two wheels to get down a narrow alleyway. The roots of this car, though, go back to "Goldfinger," the Ford Mustang's first model year. Tilly Masterson drove one in the Swiss Alps in that film, produced during the first year that Ford produced the Mustang. It also, incidentally, was the car that Steve McQueen drove in the famous "Bullitt" car chase in San Francisco.

This is the flying car in which the villain escaped in "The Main with the Golden Gun."


The AMC Pacer famously enabled the villain Scaramanga's escape during "The Man With The Golden Gun." Unfortunately for fans of flying cars, though, the Pacer could not actually fly, the "flight" was accomplished via studio trickery. Some felt that the sequence was a bit over-the-top and reflected a growing trend of fantasy during the Roger Moore era.